Professor Gansauge, what is the idea behind a therapy with dendritic cells?

The idea behind this is a kind of vaccination against cancer. The body does not recognize cancer as harmful, which is otherwise the case with other harmful cells. Therefore, one helps the body to detect the cancer cells and to destroy them by means of certain immune cells. These cells are given the information needed to recognize the cancer in the test tube under optimized conditions and transferred back into the body. This is how we are able to vaccinate against cancer

What exactly are dendritic cells?

The term dendritic cells is actually a description of the shape of these cells. Dendritic cells under the microscope have many feet and branches. Such projections are called dentrites. This special shape has given dendritic cells their name. In scientific terms, it is a CD86 positive cell.

What is the experience with dendritic cell therapy?

The experience now spans the last 20 years, includes over 7,000 publications and more than 40,000 patients. It shows that therapy with autologous dendritic cells is a very effective therapy with very few side effects, i.e., almost no side effects. Patients may get a little fever on the day of vaccination. Nothing more has been observed so far. In the palliative setting, i.e., when the tumour could not be removed and remains in the patient, we have response rates of 60 to 65 percent according to WHO criteria, depending on the type of cancer. In adjuvant therapy, i.e., when the tumour has been surgically removed beforehand, and in the prophylactic use of immunotherapy to prevent further metastases, the success rates are much higher. In the case of rectal carcinoma, for example, we were able to reduce the recurrence rate from 45 percent to 11 percent.

Dendritic cell therapy makes sense at every stage. We use it at every stage. Of course, my favorite patients are the adjuvant patients, i.e. patients with a primary tumour that could be surgically removed, still without metastases – where the therapy is applied in support of other therapies and where the therapy only has to be applied once and then, based on the follow-up examination, they report to me that everything is fine. The patients with adjuvant therapy are also the ones for whom we have the most success with this therapy, as a cure can be achieved here.

Are there differences in the composition of cells within the individual tumour cells?

A tumour is always a very heterogeneous story. It always contains the most diverse types of cells. Even the cancer cells do not consist of a clone, but it is always a variable of cells.

Does cell therapy with dendritic cells work for all types of cancer?

In the literature today, you will find dendritic cell therapies or studies in almost all types of cancer. Recently, there was even a publication on the treatment of acute myelinic leukemia. Even in this indication, dendritic cell therapy is now being used. The success rates among the different research groups and authors are very comparable, generally around 60 percent. The response rates are defined and confirmed by technical examinations, i.e., by computer tomography such as PET or MRI

Why do we normally speak of vaccination and not cell therapy?

The term vaccination has become common in the context of this therapy. This is because, in principle, one considers whether this therapy cannot be used prophylactically against cancer. However, it must be remembered that this cell therapy is only twenty years old and has so far been used almost exclusively in the palliative situation. However, to test whether there is a prophylactic effect from dendritic cell therapy, a long-term study would have to be launched with a duration that we would probably not live to see. In general, I can say that it has little to do with vaccination but is called that. One should speak of a dendritic cell therapy and not of a vaccination.

How many applications of dendritic cell therapy are necessary for the desired therapeutic success?

In the adjuvant situation, a single therapy after surgery is sufficient. In the palliative situation, the situation is different. Here, the therapy may well have to be repeated several times. The reason is that we immunize against the snapshot of the cancer. However, the cancer cell is a rather disordered cell that also changes constantly. This is also seen in conventional therapy. For example, the cells respond to chemotherapy one time, then not anymore. The cancer changes and we can hardly immunize against what is there in four months. That is why it is sometimes necessary to repeat the therapy, for example, after half a year. But that has to be decided individually, i.e., from patient to patient.

Is there also the possibility of a cure?

Yes, there is that too. There are amazing cures even in unbelievable situations. But I would like to refrain from putting these cases in the foreground and deliberately not give patients false hope. I like to explain this based on clinical studies. Among them, of course, there are always a few very lucky patients who are cured. But as a serious physician, I cannot make any promises based on these patients alone

Are there patients who do not respond to this therapy at all?

Yes, of course. With a response rate of 60 to 65 percent, the therapy does not work for 35 to 40 percent. Anyone who promises a hundred percent cure in cancer therapy today is simply lying. In chemotherapy today, we speak of success at a 30 percent response rate. 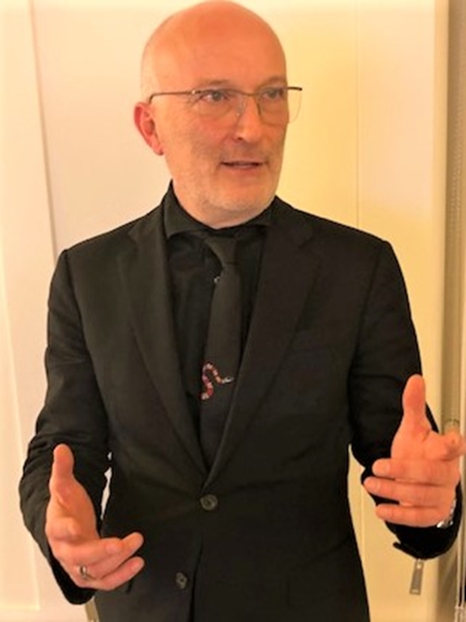 Professor Frank Gansauge during his presentation in Zurich

What is the situation with patients who are already undergoing therapy, for example chemotherapy or therapy with checkpoint inhibitors?

These therapies can be combined without any problem because we are each attacking from a completely different side. The fight against cancer can be explained very well in military terms. If you want to win the war, you need not only the air force but also the artillery, infantry and navy. I like to refer to chemo as the artillery and air force. We, on the other hand, are the infantry. The dendritic cells are the officers that go into the lymph nodes and train the soldiers, the cytotoxic T lymphocytes.

What is the difference between CAR T-Cell therapy and dendritic cell therapy?

That is a completely different principle. To stay with my comparison, for this they take the soldiers, the T-cells. These cells are genetically modified. As a result, this therapy, unlike the dendritic cell therapy, also has severe side effects. It should also be noted that it is very difficult to control. Dendritic cell therapy is a therapy that is regulated at a higher level in the algorithm. This means that I have another regulator which I do not have with artificially propagated T-cell therapy.

How do you feel about the fact that Novartis failed in its attempt to patent the CAR T-Cell therapy and withdrew the patent application?

The idea of priming T cells is not so new. These procedures have been around since the nineties. It is always a question of supply. This is another reason why I am personally a friend of dendritic cells. A dendritic cell can prime, let’s say, about 1000 cells per day, creating a continuous supply of these cells. I do not have this continuous effect with all the other therapies, i.e., via the effector or T cells. That’s why there must be a permanent supply. If we compare it with chemotherapy, today there are pumps that apply the substance over several days and thus have much fewer side effects than if they were to infuse everything at once.

Where do you see the significance of dendritic cell therapy in the future?

I’ll be honest with you, I don’t know. The idea is good, and the results are excellent. Nevertheless, there are ideas that are very good and successful and yet have been kicked to death. The interest of the pharmaceutical industry with its centralized structure certainly plays an important role. We know the system from the manufacturer to the wholesaler to the pharmacist or hospital. This is not possible with dendritic cells. I can still remember well when we presented our laboratory to the public in 2002, a pharmacy wanted to order ten packs of dendrites afterwards. Of course, that is not possible, and this decentralized structure that is required here, the whole pharmaceutical industry is not prepared, not even for individual production.

Professor Gansauge, thank you very much for the interesting interview.

The first choice of cancer therapy is still surgery. Here, an attempt is made to surgically remove the primary tumour. After the operation, chemotherapy or radiotherapy are often used as prophylaxis. The aim is to destroy any remaining tumour cells. Only the metastases are not fought, but only the primary tumour.

Why not start with an immunotherapy with dendritic cells.

This therapy has few side effects and has been carried out for years (first cancer vaccination in 1996) in numerous clinics and by renowned doctors worldwide. Studies in the early years 2003 at the Charité in Berlin already proved a high immunostimulatory effect. Already by Moldenhauer et.al. 2003-2017 and at the Institut Pasteur (Vuillier et al 2001) already demonstrated a high clinical effective therapy use.

Since the Nobel Prize for Medicine was awarded to Dr. Ralph Steinmann in 2011 for his discovery in 1973 and its possibilities in the treatment of cancer, there have been over 100,000 scientific publications, studies, dissertations and press releases to date. All of them prove the effectiveness and effect in cancer therapy with dendritic cells and point to the therapy successes.

Dendritic cell therapy with one to several application cycles can be carried out at any stage of the disease. As it has hardly any side effects, it is also combined with other therapeutic measures, which can lead to positive effects. (For example, pain-relieving drugs could be dosed less or even discontinued). The following positive effects of dendritic cell therapy have been scientifically proven:

Targeted immune activation via APC cells with tumour material leads to an increase in tumour destruction. The tumour cells are increasingly led into apoptosis (cell death). The mean survival time can be significantly prolonged in patients with advanced tumours, and even complete remission cannot be ruled out. A complete remission after treatment with dendritic cells has already been observed many times. Due to these biological effects of dendritic cell therapy in tumour diseases and metastasis formation, its use is also indicated in the palliative therapy situation.

This website uses cookies to improve your experience while you navigate through the website. Out of these, the cookies that are categorized as necessary are stored on your browser as they are essential for the working of basic functionalities of the website. We also use third-party cookies that help us analyze and understand how you use this website. These cookies will be stored in your browser only with your consent. You also have the option to opt-out of these cookies. But opting out of some of these cookies may affect your browsing experience.
SAVE & ACCEPT